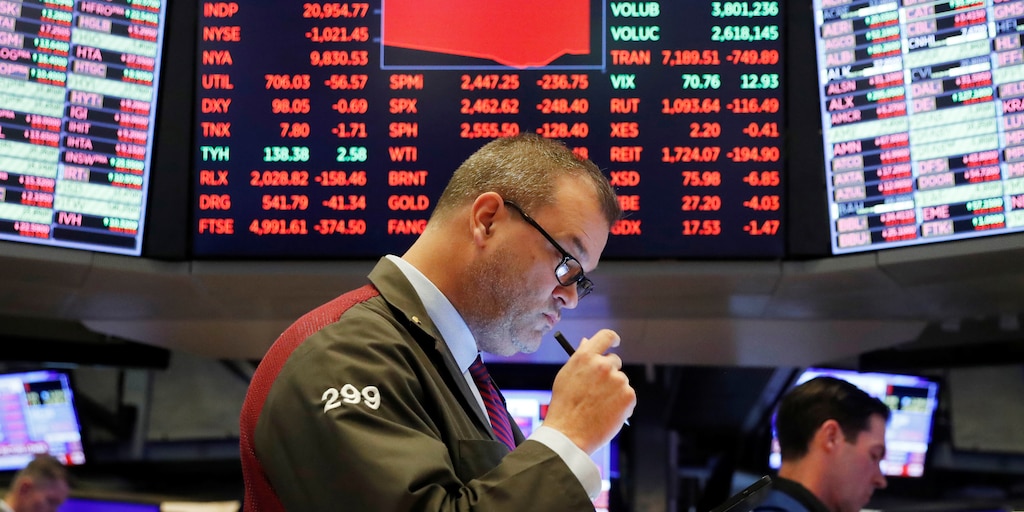 On Monday, US stocks plummeted at the start of trading in New York, triggering a market circuit breaker for the third time in one week.

The S&P 500 fell as much as 8% almost immediately after the opening bell, past a key level that set off the breaker that halted trading for 15 minutes. The pause also came in a week where US stocks multiple times hit limit up and limit down levels, which result in a trading halt as well.

A market circuit breaker is a key level put in place to limit sharp sell-offs. They were first implemented after the stock market crash in October 1987, when the Dow Jones Industrial Average shed 508 points, at the time nearly 23%, in one day.

“The equities and options exchanges have procedures for coordinated cross-market trading halts if a severe market price decline reaches levels that may exhaust market liquidity,” according to the New York Stock Exchange. The market-wide circuit breakers, as they are called, are measured by a single-day decrease in the S&P 500 index.

There are three circuit breaker thresholds that can result in trading halts, according to the NYSE.

The market circuit breakers in place have been updated a number of times following other high-profile crashes, including the May 2010 flash crash when the Dow lost 1,000 points, then about 9%, in roughly 10 minutes.

The rules were most recently revised in February 2013, and now apply to both individual securities and market indexes like the S&P 500. Level 2 and Level 3 circuit breakers have yet to be triggered in their current form during regular trading hours, between 9:30 a.m. E.T. and 4:00 p.m. E.T.

Read more: ‘Practically stealing’: Jefferies mapped out dozens of cheap stocks worth owning in a coronavirus-stricken market. Here are 10 of their top picks.

What does limit up/ limit down mean?

There are also single-stock circuit breakers that monitor gains as well as losses in the market for individual securities and exchange-traded funds, meant to address extraordinary market volatility.

These triggers fall under the National Market System Plan, and are also known as Limit up/ Limit Down or LULD. The plan was approved as a permanent rule by the US Securities and Exchange Commission in April 2019.

LULD is designed to prevent trades from “occurring outside specified price bands, which are set at a percentage level above and below the average reference price of a security over the preceding five-minute period,” according to the plan. They generally come into play when securities trade up or down 5% from a set price.

Here’s what the different tiers entail:

When securities hit limit up or limit down, trading is also halted, usually for five minutes. The trading pause can be extended to 10 minutes, the plan says. Pauses can also occur when US futures hit the limits outside of regular trading hours, according to CME Group.

In premarket trading late Sunday, US stocks hit limit down, curbing trading as markets reacted to the Federal Reserve’s emergency rate cut. In early trading on Friday, March 13, US futures hit limit up, rebounding after one of the worst market routs since 1987.

US stocks have hit both the circuit breakers and the limit up/ limit down many times over the last week during sessions with heightened market volatility.

What does it mean when markets hit a circuit breaker?

While hitting the key levels and seeing trading suspended can be alarming, the pauses also show that the triggers are working as they should be, Carlton Neel, CEO of quantitative investment research firm Chaikin Analytics, told Business Insider.

“It’s working the way it was designed,” Neel told Business Insider. “You need everybody to just sort of take a break and a breath. And frankly, it also means that a lot of the algos and a lot of the computer trading is shut off as well.”

Neel also pointed out that markets have only hit one of the circuit breakers each day — the Level 1 trigger — but have not fallen beyond that.

“Rather than having those flash crashes, you basically get this air pocket in the market,” Neel said. “As a result, people can sort of line up their orders and figure out what they’re going to do.”

Stock market The stock market’s gyrations feel historic. But are they?

Stock market Worried about the stock market? Resist the urge to panic

Stock market Where is the stock market headed? Wall Street can’t make up its mind amid coronavirus outbreak

Options trading The Rosewood Bermuda is like joining your own vacation country club with access to multiple pools, a golf course, tennis courts, and a private beach — but be aware it’s not a beachfront hotel

Options trading Rhone consistently ranks highly when we test athleisure gear, so we took another look at some of our favorite styles from the brand

Options trading Electric cars and self-driving tech have gotten off to a slow start. Companies like Tesla, GM, and Waymo are hustling to change that in a big way.